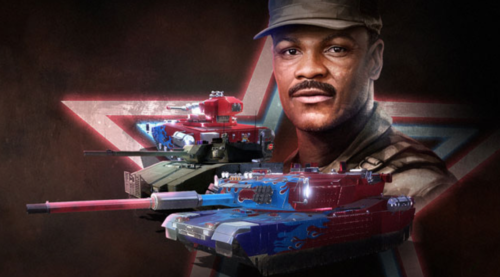 Armored Warfare has expanded upon its explosive “American Dream” season with the release of the “Last Patriot” Battle Path! This new addition brings a classic American cinematic style that pits players against the sinister Enigma organization in order to save the world and locate the missing war hero, Commander, Austin Harper. Along the way, players will earn new equipment, American-themed skins, and other challenge-based rewards. Campaign access is now available for purchase in-game or via the Game Market, using real or in-game currency.

The new Battle Path contains 50 action-packed levels to progress though, with an exclusive American-themed reward granted upon the completion of each level. The robust path contains four chains of tasks to dominate along the way, earning unique rewards and a special currency that can be used to level up, skip missions, or get Patriot containers (with another unique machine).

A new arsenal of American-themed tanks and equipment are available, providing new and destructive ways to destroy your enemies, including:

Upon completion of the Battle Path tasks, players will be able to unlock a new unique commander: Austin Harper. He will inspire allies on the battlefield, enhancing their characteristics. When his associates drop out of the game, he will become more violent, building up his own power with every loss.

Along with gold, tokens, experience and premium status, players will also receive a host of special thematic skins for equipment, camouflage, decals, avatars and flags to show off. The “Last Patriot” Battle Path is full of exciting challenges, each with their own stylish reward and bragging rights.